You play Frae, a magical girl that’s saved the world countless times. However, each and every victory in the name of ‘peace’ has been taken and twisted by political global powers for their personal gain. Not only that, but they’ve had the gall to beg, coerce, and blackmail you to do shit for them over and over and over again.

You’ve had it up to here with em and honestly? Fuck those guys. So you’re taking the fight to them.

When determining an action roll 2d6 and take the highest number. If you get 5 or 6, things go exactly as you want them to. If you roll 1-4, then you still succeed, but an UwUoops happens. If you roll pairs ([1&1],[4&4]) then you Double Down.

An UwUoops is when things go awry. Your power goes a bit out of control & you cause more damage than intended, or things go hamtastic. As this is a very success-forward game it shouldn’t be too bad but should still throw a wrench into Frae’s current plans.

Doubling Down is when the powers of the world go over the top in trying to stop you (say banding together and combining armies, or dropping a nuke on you) and you simply go the extra mile in stopping them. When Doubling Down, you use your magical powers and make the problem go away, but you make it EXTREMELY extra and flashy. For everyone else, it’s awe-inspiring. For you, it’s Tuesday.

Corrosive Touch. Any weapon(magical or non-magical) The Ooze That Eats the Heavens comes into contact with deals -1 damage until it is repaired. This can stack until -5, where the weapon breaks completely. Any melee weapon that rolls a natural 1 against it deals -2 damage and the user must make a DC 16 Dexterity save or it is lost inside the ooze.

Engulf. The Ooze That Eats the Heavens can occupy another creature’s space, and vice versa. A creature that starts its turn in the ooze’s space is subject to its Absorption. The ooze’s space is difficult terrain.

Absorption. A creature engulfed by the ooze, or hit by its slam attack, must succeed at a DC 16 Dexterity saving throw or become restrained for one minute. A creature that spends an action trying to remove the resin is entitled to another saving throw at the end of its turn. More than 20 points of fire or radiant damage on The Ooze That Eats the Heavens releases all absorbed creatures as its form destabilizes.

Legendary Resistance (3/Day). If The Ooze That Eats the Heavens fails a saving throw, it can choose to succeed instead.

Multiattack. The Ooze That Eats the Heavens makes two slam attacks, plus an additional slam attack against each creature within its space.

Surge(recharge 5-6). The ooze raises itself up into a wave as tall as 50ft and surges forward 20 feet.

It Must Feed. The Ooze That Eats the Heavens is attached to a Holy Stone it is determined to feast on. Until the Power Towers are destroyed it focuses entirely on feasting and ignores any creature otherwise.

Power Tower. The Ooze That Eats the Heavens has 4 pillars of holy energy it is draining for power. Every turn, for every pillar that stands, the ooze regenerates 10hp. The pillars have 40hp and are resistant to all damage aside from bludgeoning, thunder, and force. The pillars deal 2d6 necrotic damage to any creature within 5ft when struck.

Corrupted Guardians. While the Power Towers are up, The Ooze That Eats the Heavens has a corrupted Ghostblade Eidolon (MOT, p222) guarding it for each Power Tower. The guardians can use Misty Step as a bonus action twice. They also regenerate 1hp every turn while their associated Power Tower is up and immediately dissipate if their Power Tower is broken.

No one knows where The Ooze That Eats the Heavens came from. All they know is that through some terrible happenstance, a force of corruption started feeding on a great amount of holy power. The Ooze That Eats the Heavens is only ever found feasting on a large holy power source such as a sacred stone, god spark, or any major relic of great power. By the times a party finds it, it has likely feasted to great amount, contributing to its gargantuan size, and has more than likely corrupted the forces meant to guard the power source it feasts on.

You play folks in a world where plants and animals randomly shrink and grow in size.

So someone suggested I do a little devlog about how I ultimately came up with DEAD INSIDE. I immediately thought “wait why would anyone want that? It’s just a tiny little one-pager and I don’t even think it’s all that good.” But honestly I haven’t ever really seen the process behind a one-pager; typically, you can follow a project for months bit by bit on a blog, but never really all in one place.

So. In seeing that, thought some folks might be interested in it. If even one person reads and gets something from my process I think it’d be worth it. I plan to mostly go behind some of my thoughts on design and the ‘how/why’ before I go into the exact ‘what’s. In doing this, I’m hopefully going to reveal ALL of my thoughts surrounding this game.

Remember: you can find DEAD INSIDE on my itch.io here: https://dicequeen.itch.io/dead-inside

Alright let’s do this.

END_OF_DOCUMENT_TOKEN_TO_BE_REPLACED

A game of Hope, Zombies, and Microtransactions.

I mostly just wanted to test if I could make a basic system using microtransactions and changing values for valuable resources. Sure, you can TECHNICALLY succeed without spending your stuff, but it’ll be kindaaaa hard.

The setting doesn’t matter too much, but I like zombies.

You’re a teen/young adult working in customer service at the mall. One problem: THERE’S A ZOMBIE APOCALYPSE. OH NO.

END_OF_DOCUMENT_TOKEN_TO_BE_REPLACED

As someone that ALWAYS GETS HER PERP, I, the detective, am here to teach you some tips and tricks to make sure the right sus with a mo gets thrown in the slammer. Note: most of these tips and suggestions work best with established or competitive groups, as being a detective can come off extremely sus. Being sus on any level in pub games is an airlock out. So know who you’re playing with.

END_OF_DOCUMENT_TOKEN_TO_BE_REPLACED

I’ve been thinking of new ways to play 5e(or pretty much any game with a handful of bestiaries like Pathfinder) and I would like to propose a new set of rules for your scrutiny!

Here’s the basic idea: you don’t play classes or anything like that. Instead, you play exclusively as the creatures you find in the Monster Manual / Tome of Foes / Guide to Monsters / anywhere else you can find a creature. How it works is that you play as ‘Shifters’ or ‘Changelings’ or literally any being you think of that can completely change its form.

You start off with a limited number of forms but eventually grow into someone capable of changing into more forms than a druid can ever imagine. For the purposes of this write up I’ll be using the term ‘shifters.’

END_OF_DOCUMENT_TOKEN_TO_BE_REPLACED

As you might know, if you’ve been following my recent burst of Umineko content, I wrote a gameboard/forgery for Umineko titled ‡Figments of the Golden Witch‡.

In this time I’ve received a lot of great theories! I’ve been extremely pleased to see folks attempt at it despite not being able to give everyone a Red-Blue Truth battle as they might like. That sort of privilege I’ve only given to the beta testers. If you’re interested in beta testing my next game, let me know in the comments! I just might invite you to try it next time~

That said, with that under the way, you might also know that I still want to make this mystery a downright NIGHTMARE for all you would-be witch hunters out there. Can’t let you have your easy victories without a fair fight. So, in lieu of the Red-Blue Truth battles you might see in Umineko, I’ve come up with this ‘Red Bomb’ system where I just post up additional red to shut down the more outrageous or remarkably clean theories I’ve received thus far! I hope this forces you all to rethink your various truths~

Note: Red Bombs are intended to be read AFTER you’ve given the gameboard a shot.

END_OF_DOCUMENT_TOKEN_TO_BE_REPLACED

So I’m rereading Twilight and I’m getting more invested in this theory of Lambda being an expy for the reader’s role.

What do I mean by this?

Note: this write-up has a LOT of spoilers and most certainly answers to a large portion of Umineko’s major mysteries. PLEASE BE ADVISED. DO NOT READ THIS IF YOU HAVE NOT COMPLETED THE SERIES.

END_OF_DOCUMENT_TOKEN_TO_BE_REPLACED 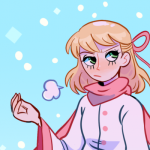 What is This Blog Even?

There’s no real focus to this blog outside of a particular love for GMing, some highlighted thoughts, and to showcase my panels and work.

Things I Talk About

Back to top
Dice Queen
Website Powered by WordPress.com.